Approach trek from Askole to Gasherbrum BC 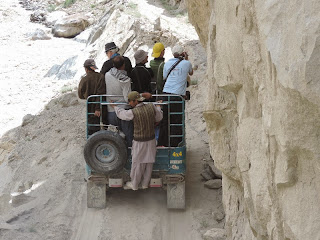 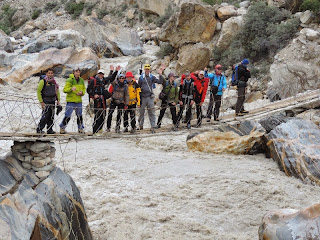 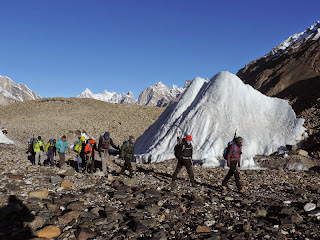 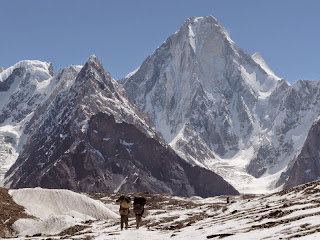 14/06 From Skardu by jeep to Askole
Distance of 120 km.
4 landslides.
Two times road was washed away by the river. In between four pick up jeeps
carried loads and people. 30 min walk to campsite at Askole.
Weighing the loads. 25 kg per porter.
96 porters and 16 donkeys will carry our expedition load.

15/06 Askole (3050m) to Johla (3150m)
The 21 km we managed in 7 hours. Half way we had lunch at Korophon.
Just before reaching the lunch spot a big river had to be crossed. The water
was very, very cold and our underwear got wet. Further up the trail we met
David Lama and his film team who are on the way to Masherbrum.

17/06 Restday at Paiju (3400m)
Today the porters prepared their foof for the upcoming days on the glacier.
They got flour to bake chapaties and two goats.
Some of the AMICAL members went up to a view point (3650m) their K2 and
Broad Peak is visible. I checked the route to the glacier.
It was a warm and sunny day without wind.

21/06 Shagrin (4750m) to Gasherbrum I & II BC (5050m)
Early in the morning at 4:30 I started with HAP Ali to look for a good place
for our basecamp. After two hours walking we turned left on the middle
morain of the Abruzi Glacier. From 5000m on there are campsites. We were
looking for a place close to the icefall and flat enough for setting up our
dome tent. There was already a small camp on the morain which belonged to
Artur Haizer and his climbing partner (Poland). Just above their campsite we
found the site of our basecamp for this season. An hour later the first
porters arrived. Finally 82 porters and 15 donkeys reached BC. The members
of AMICAL needed 4 h for the 12km from Shagrin and arrived at 10:00.
Eingestellt von Unknown um 11:31 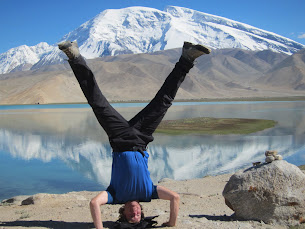 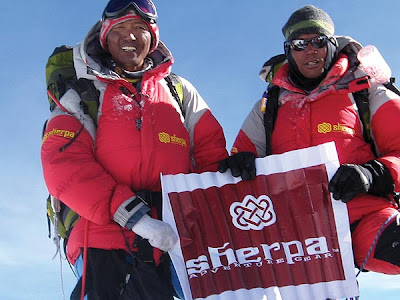